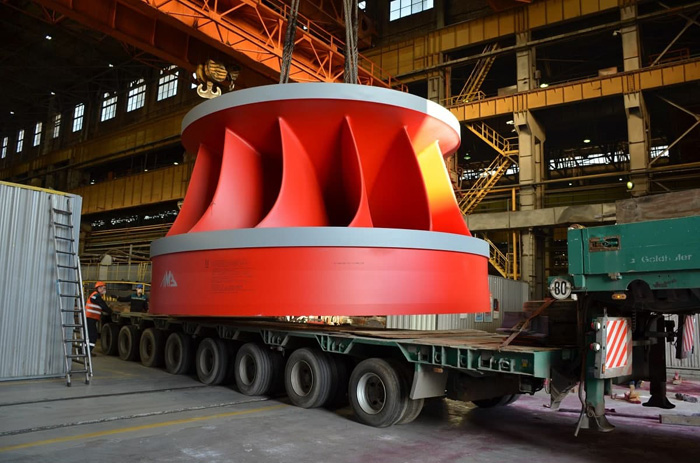 The cargo will soon be delivered by sea to the Magadan Sea Trade Port️, then about 450km by road to the construction site of the HPP. Its diameter is almost 6m, its height exceeds 3m. Arrival at the HPP site is scheduled for January 2021.

The equipment was manufactured in accordance with the agreement between Power Machines and JSC Ust-Srednekanskaya HPP named after A.F. Dyakov, signed in 2019. The obligations of Power Machines include the manufacture and supply to Ust-Srednekanskaya HPP of two radial-axial impellers for hydropower units No. 1 and No. 2, as well as installation supervision of the equipment supplied.

Completion of the second impeller is scheduled for December this year.

New impellers will replace the assemblies temporarily installed by Power Machines in 2013 and designed for a reduced head within 24 to 46 m range.

Completion of the project will allow implementation of major infrastructure projects in the Magadan Region. In addition, the hydraulic power station will facilitate shipping by regulating the flow of the Kolyma. New power generating capacities will reduce the consumption of imported fuel and will help to curb the growth of tariffs for electricity by reducing the cost of its production.

Three hydropower units of the Ust-Srednekanskaya HPP, which have been in operation since 2013, are equipped with Power Machines equipment. Each unit includes a 142.5 MW hydraulic turbine, a generator complete with an excitation system, and an automatic control system (ACS) of the hydropower unit.

In 2018, hydropower unit No. 3 became the first at Ust-Srednekanskaya HPP, where a permanent impeller was installed. This made it possible to ensure the joint operation of replaceable impellers of hydropower units No. 1 and No. 2 and the standard impeller of the third machine.

With the commissioning of the Ust-Srednekanskaya HPP, the energy security of the region has significantly increased. Before its commissioning, the needs of the isolated Magadan power system were 95% provided by only one power plant – the Kolymskaya HPP. Currently, the Magadan Region has a redundant highly maneuverable source of generation, which has the most positive effect on the reliability of power supply to the population and industrial enterprises.