Power Machines became an award winner at the International Competition of Scientific, Technical, and Innovative Projects

Power Machines was awarded a laureate diploma at the International Competition of Scientific, Technical, and Innovative Projects Aimed at the Development of Fuel, Energy, and Extractive Industries in 2021. The award ceremony for the winners of the competition took place on October 7 as part of the St. Petersburg International Gas Forum 2021. 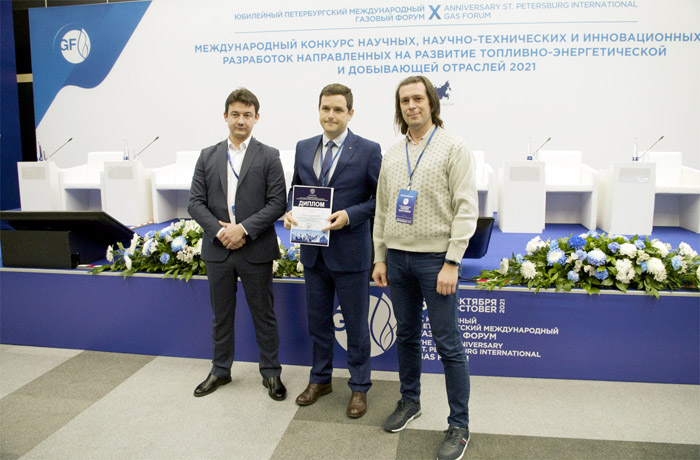 The project of Power Machines to "Increase the cooling rate of rotors of gas-cooled turbine generators" was presented for the competition. Authors of this work are employees of the special design bureau for the design of turbine generators at the Electrosila plant (part of Power Machines), Tatyana Nikolaeva Kartashova, head of the electromagnetic calculations sector, Aleksei Grigorievich Filin, chief specialist in thermal and ventilation calculations, and Aleksei Yurievich Prokofiev, chief specialist of the diagnostic systems design department at Power Machines. All team members are Candidates of Technical Sciences (PhD in Engineering).

The study deals with a patented system for gas cooling of a turbine generator rotor winding using inclined cooling channels with a sequentially changing angle of their inclination along the length of the rotor. The proposed cooling system makes it possible to ensure the optimal distribution of the gas flow in the channels along the rotor length, to increase the average level of gas velocities in the channels, to reduce the uneven distribution of the winding temperature along the rotor length, and to reduce the temperature of the winding in the middle of the rotor and the average temperature of the winding. The developed system contributes to an increase in the unit capacity of turbine generators, especially those with air cooling, which are in demand in the power industry of the Russian Federation.

This year's competition featured 196 entries from 88 companies related to oil and gas, the coal and peat industry, electric power, renewable energy, pipeline transport, nuclear power and mining industries. The competition was supported by the Ministry of Energy of the Russian Federation.