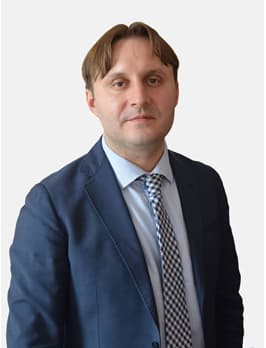 Alexander Vitalyevich was born in 1979.

He graduated from the Moscow State Institute of International Relations of the Ministry of Foreign Affairs with a degree in World Economy (international economist).

Prior to joining Power Machines, he was responsible for the formation and development of strategies and led the process of mergers and acquisitions in a number of large companies. In particular, he headed up the work on the analysis and structuring of transactions in the companies Invest AG, EvrazInvest, and Fortum.

SIn 2011-2018, he worked at RusHydro International JSC, where he worked his way up from being the Development Director to being the First Deputy General Director.

In April 2018, he headed up the Power Machines Directorate for Strategy. Since 2019 he has been the Deputy CEO - Head of the Hydropower Division of JSC "Power Machines".